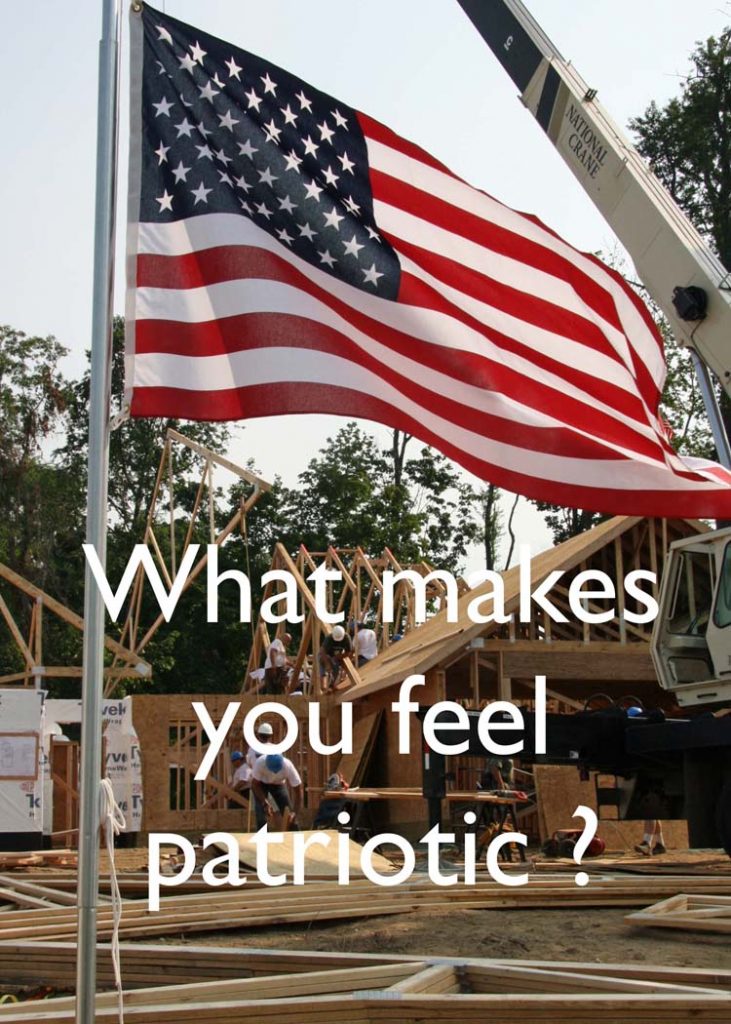 For much of our lives Independence Day in the United States  has been associated with time for family picnics, vacations, gardens blooms and four-day retail marathons. This week’s writing prompt asks you to be more specific about what makes you feel patriotic.

Sometimes it’s an unexpected moment that awakens our insightfulness.

On Thanksgiving in 2013 I created a life story game with a series of questions. Everyone pulled a number from a jar and answered the corresponding question. A woman from Watertown, Massachusetts was asked what made her feel patriotic this year. If you remember, earlier that April, domestic terrorists – two brothers – killed numerous people at the Boston Marathon bombing and completely shut down the region. She lived down the street from where the younger brother was captured.

Numerous people suffered from that event. Some still do.

This woman explained that no matter where she went or what she did she couldn’t escape the terror, fear and destruction of human life. She spent fretful days in fear for her life. For months she suffered from severe headaches and panic attacks. Relief slowly arrived in the form of cards, letters, and artwork from school children across the country, who simply sent them to businesses and government offices in the area. Store windows were filled with displays of kindness and encouragement. It was a big relief to know people from around the country cared how she and her neighbors were feeling. That made her feel patriotic, that she was something bigger than the crisis that sometimes hits us. She was an American and Americans lift each other up.

I felt the same way earlier this year while standing in long winding lines to receive my COVID-19  vaccine. Americans coming together for the good of all. To me, it felt a little miraculous that so many thousands of New Jersey residents – now nearly 5 million – could be silent doing anything, while moving along. For the good of our neighbors, our health, our community. Having the freedom to make that choice for my own health and that of my family makes me feel patriotic.

Think about this question and how you would define it in your life stories or legacy letter.

(Writing tip: If you’re not ready to write this one, try making a list of moments in your life when you did feel patriotic. Did it have to do with a charitable event? Something you did where you went out of your way to help another person? Your time in service? Or what freedom means to you?)